A Day at Sea

Last night I was trying to download photos from the camera and it would not work. I discovered that I could not turn the camera off. I took the battery out and put it back in, but it still would not work, and since it had been on a long time, the battery was discharged. I went to sleep without fixing it.

Barbara set her alarm for 7:30, but it went off at 6:30. She got up, but I didn't. I set a wake-up call for 7:30 and it came on schedule. I found that when I had reset my watch to lose an hour, that it had not "taken". So when I went into the bathroom I tried several times to set my watch to the correct time, which I eventually managed to do. That meant that there was not time to take a shower, so I just put on a dress and we went to breakfast. 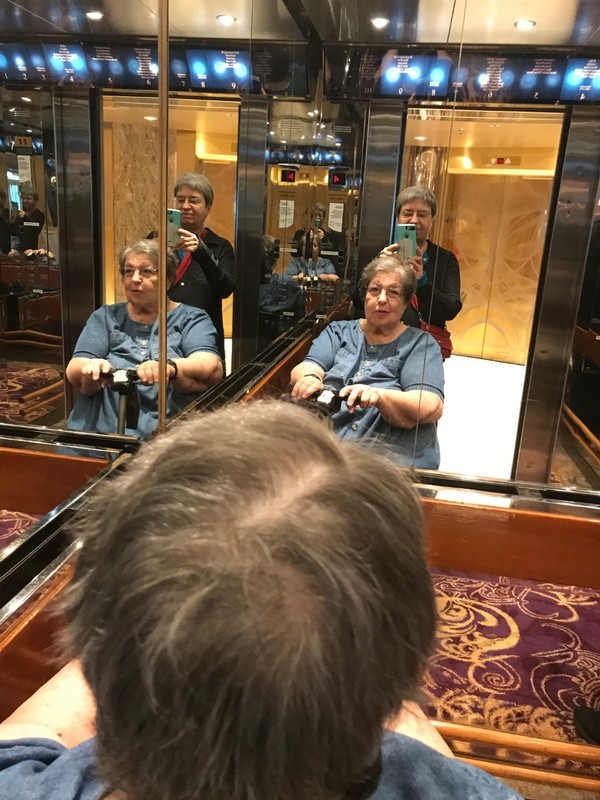 I took the little water bottle filled with cranberry juice (which I filled last night and managed to spill some on my nightgown). We were at a table for 10, a red headed man with a beard from Frederick who said he was a chef, his daughter (also a red head), his wife (a nurse) and an older son. Then there was an older couple from Richmond and her daughter and son-in-law. We both had the special onion and bacon quiche with grilled tomato 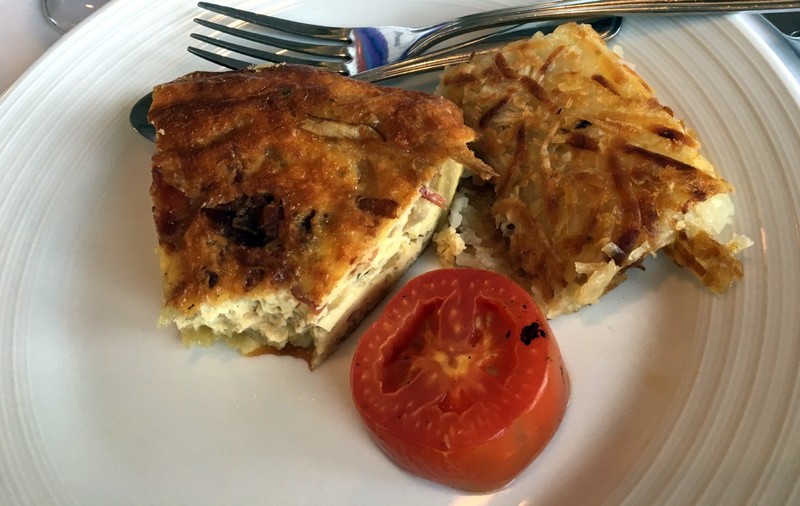 and I had hash browns and Barbara had grapefruit. She said Bob does the grapefruit better. I though the special would be quicker, but it was not. They still have the cold cereals etc at a buffet. 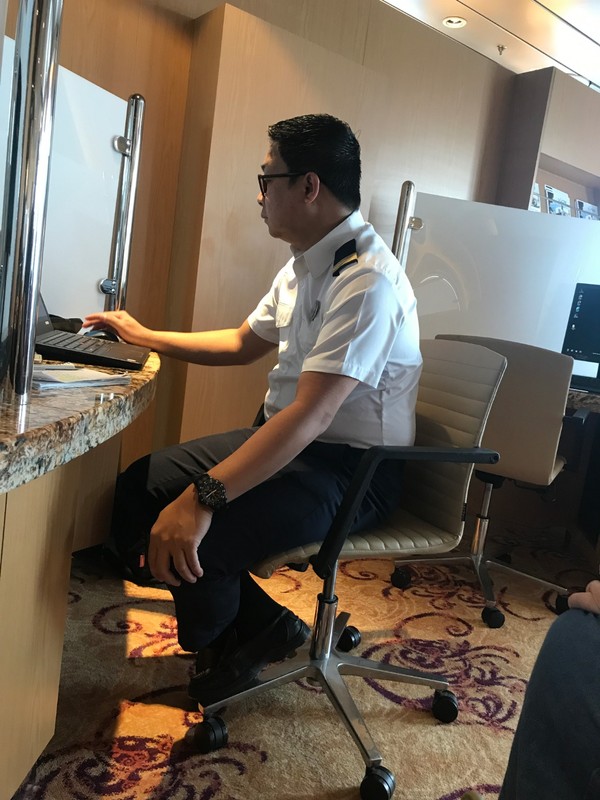 We went to the Computer room at 9 and he figured out that I couldn't sign on because I thought that the S was a 5. He thought that the B was an 8 so I don't feel so bad about thinking that the 5 was an S. He credited me back with the package I signed up for last night, and he told Barbara what her code was (and she later found her card with it on it). Then we went to turn in the Excursion tickets for the BAMZ tour which they re-scheduled to Monday, and got a refund. 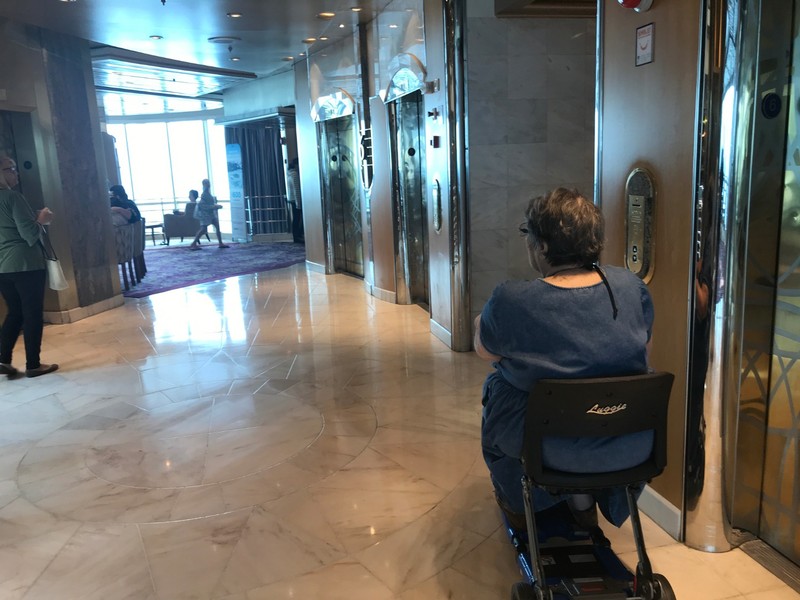 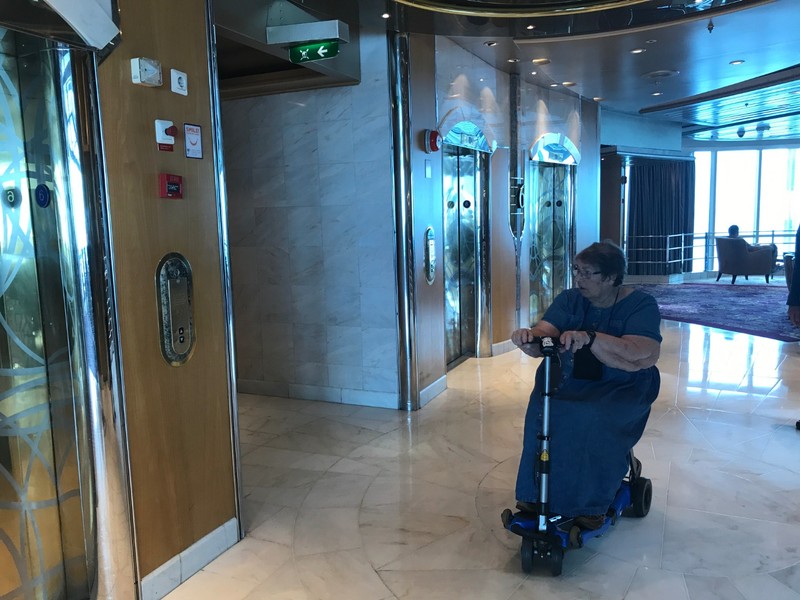 Then we went up to the Cruise Critics meeting - we did not win any of the raffle prizes. There were two backpacks with items in them like hats and T-shirts, and there were also things like a free play at bingo, and a bottle of wine and a bottle of champagne. Two of the people who drew tickets drew their own ticket.

They had munchies and coffee, and the cruise director was in charge of the meeting. It was interesting and we learned that there is only one formal night (tonight) and that we would have Halloween on Oct 30th instead of the other formal night. They didn't want to have it on the 31st because we would be packing to disembark the next morning. They did not have us introduce ourselves which I think would be a really good idea 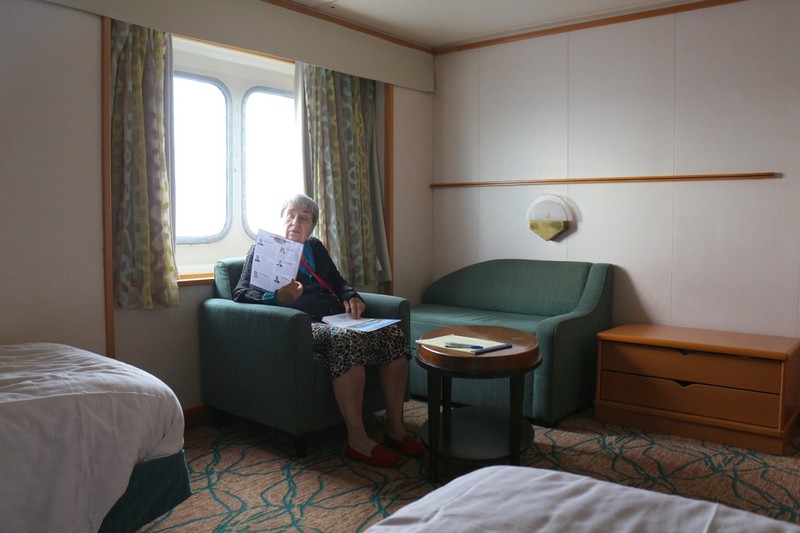 Barbara wanted to know who this woman was - her portrait is outside the dining room. So she looked it up and this is what she wrote: "Busman’s holiday. Steaming to Bermuda with my sister on Royal Caribbean, see huge portrait of a woman of my vintage, ‘Aviva Ofer,’ godmother of ‘Grandeur of the Seas.’ Curiosity piqued. An hour’s surfing later (who needs the ship’s entertainment?) reveals she was the wife of the cruise line’s cofounder. Curiosity satisfied." 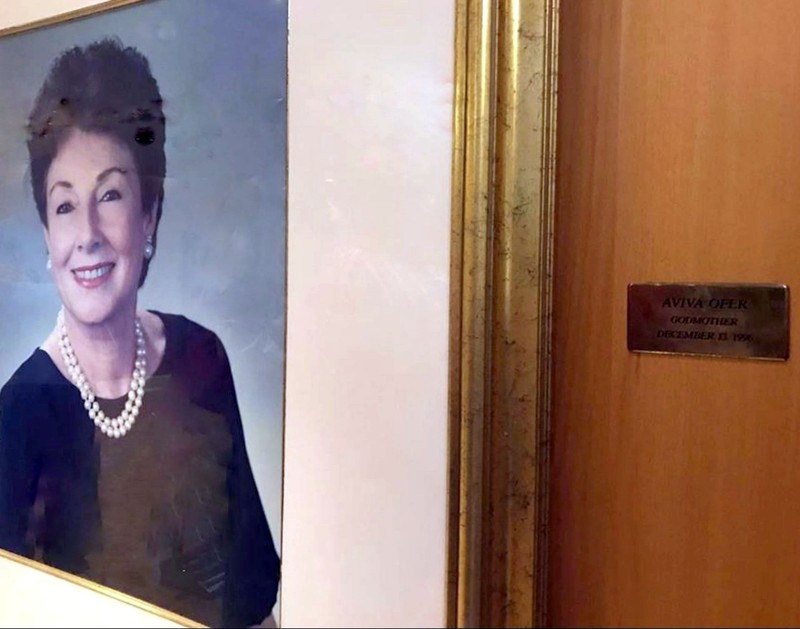 Godmother of the ship

We went to lunch and sat at a table for 6 - two women from Dover Delaware and a couple. He was the only man at the table. Three of them had been to Bermuda many years ago. So a lot of the conversation was about what to see in Bermuda. The soup of the day was zucchini which we both got (Ok but nothing special), and then Barbara went to the salad bar (which looked very good) 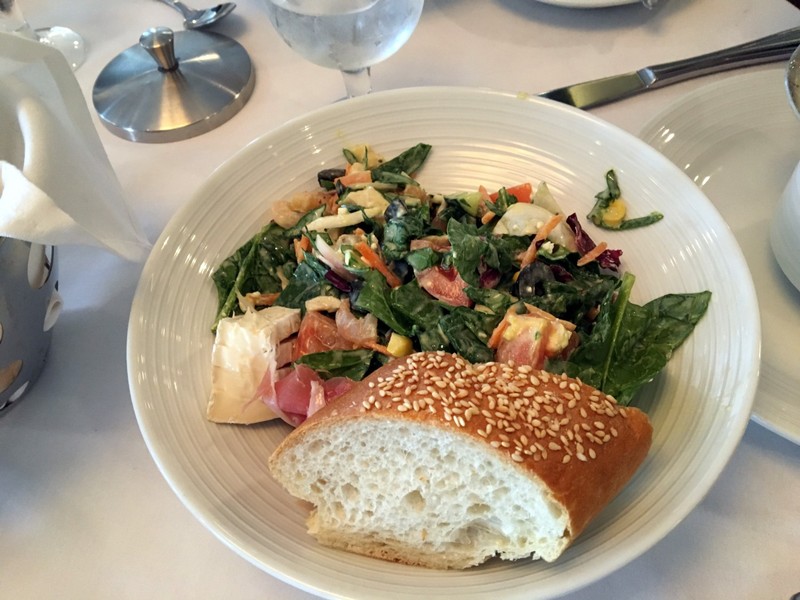 and I got the pasta of the day, which I could only eat a little bit of it. (It was a very large bowl). 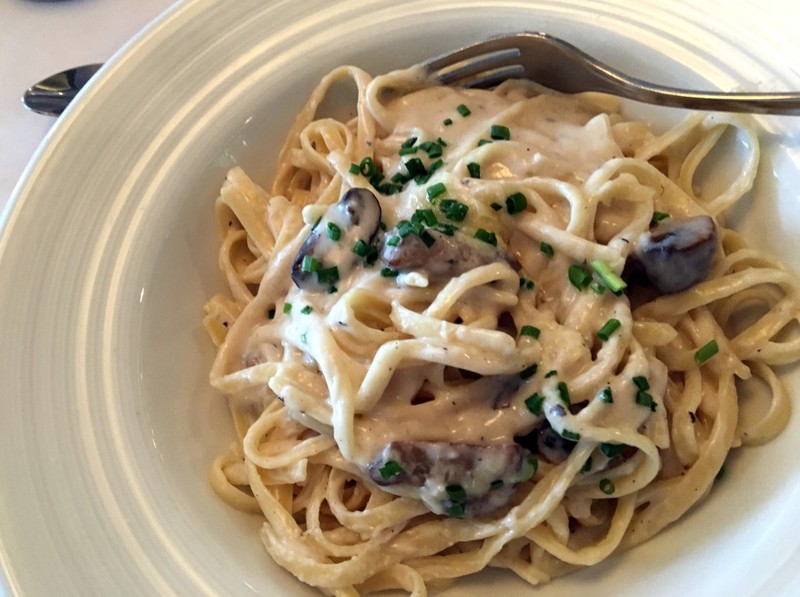 Then I got the raspberry cake special, 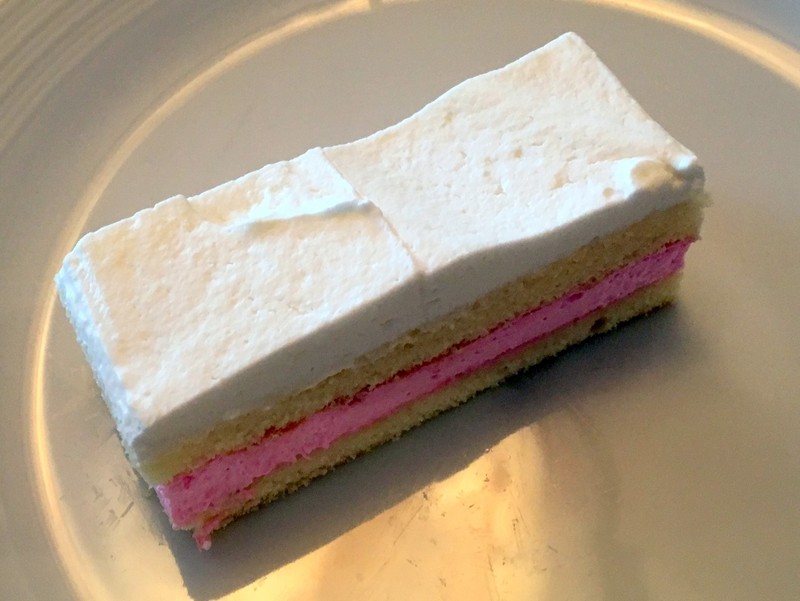 but I should have gotten the raspberry sherbet. Barbara had what the called the "Apple Parcel with vanilla ice cream"

We went back to the cabin. I found another different battery which may work better and managed to download the photos from the camera that I had managed to take. Then dictated some stuff into Barbara's iPad about the family, and then we both fell asleep. I slept until after 4 and then got up and took a shower. I was able to regulate the water so it wasn't too hot. The shampoo doesn't lather very well. It was formal night, so we got dressed in our fancy long dresses. 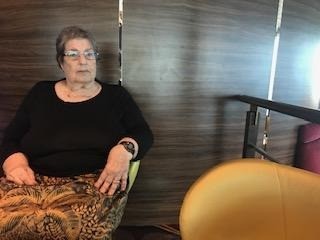 We had reservations for Izumi the Japanese restaurant which is on Deck 11 and only the Centrum elevators go up to that deck. 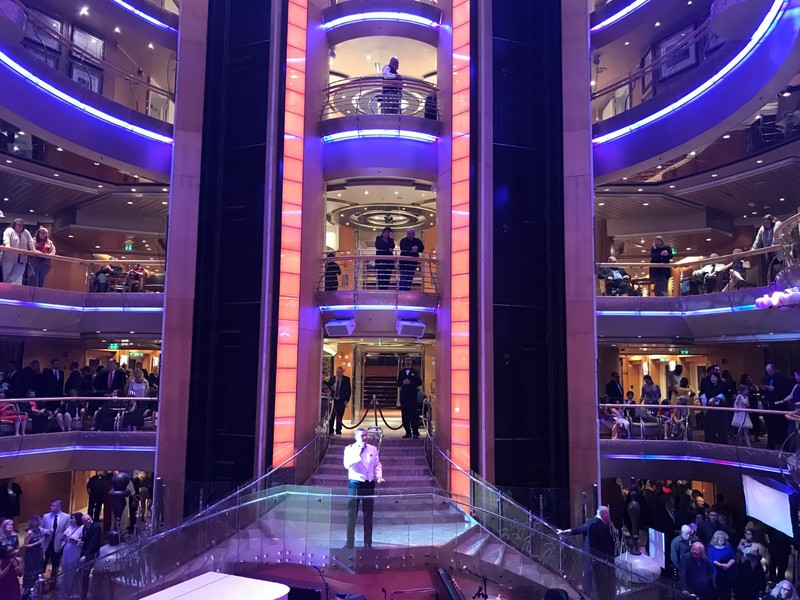 We were a little early. 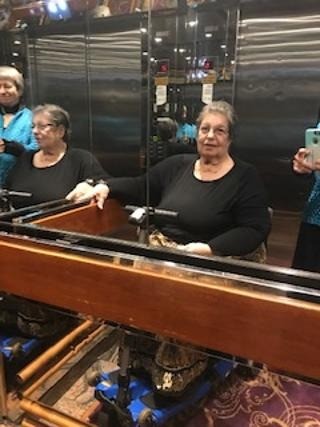 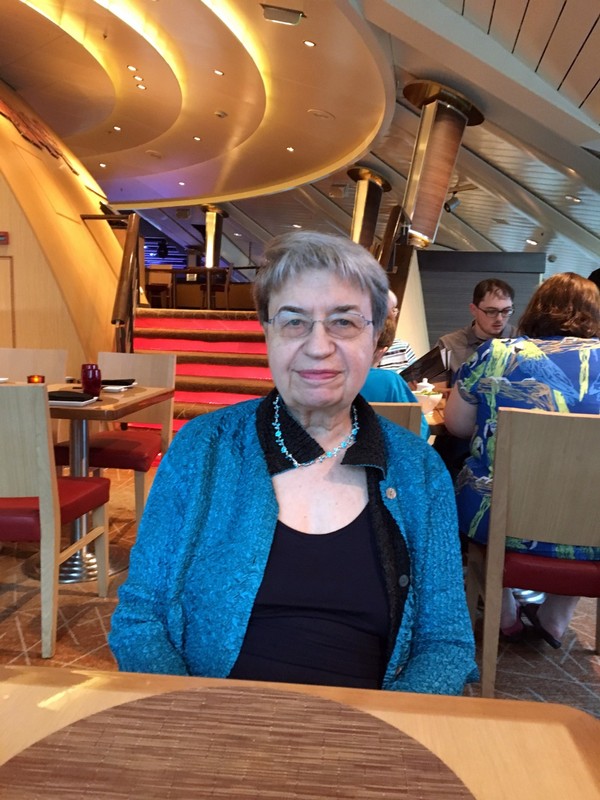 Barbara ordered for me - we started with complimentary edamame with sea salt which was ok. 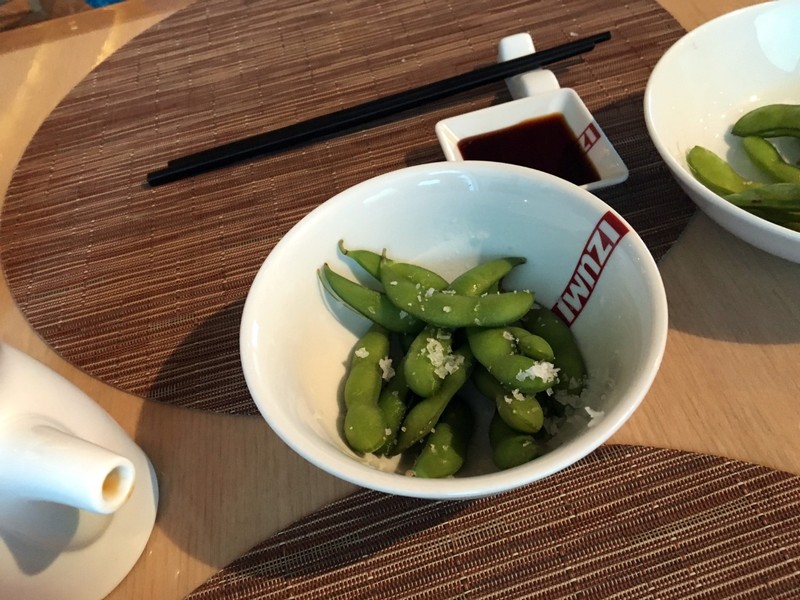 Then we had miso soup (not a big hit for me), seafood salad (ditto) 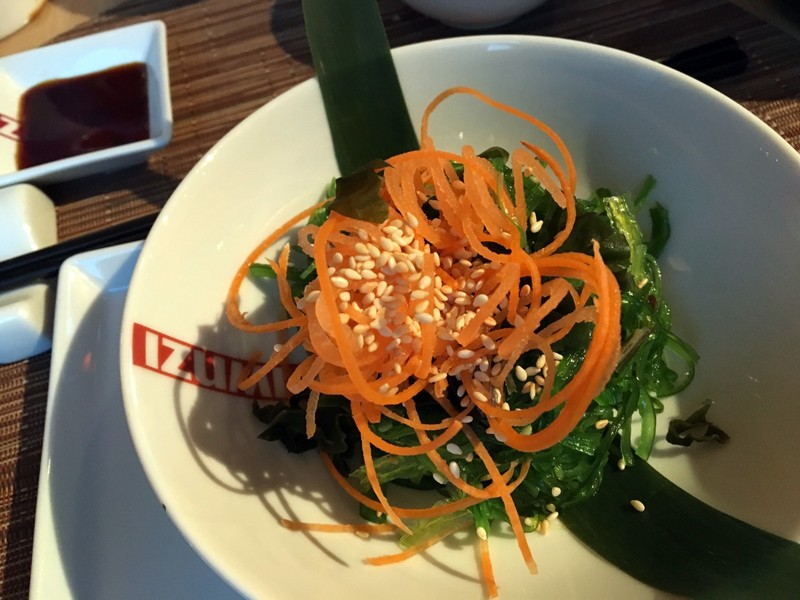 and then had some raw fish (yellow tail, salmon and tuna around rice with ginger. The ginger cleared out my sinuses. I wasn't terribly thrilled with that either. 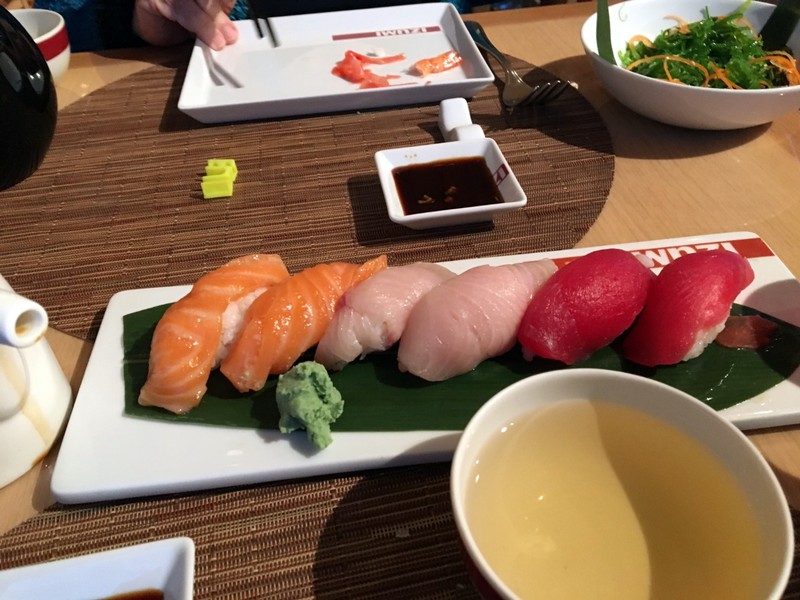 So then she order Dragon eel. This was pretty good. 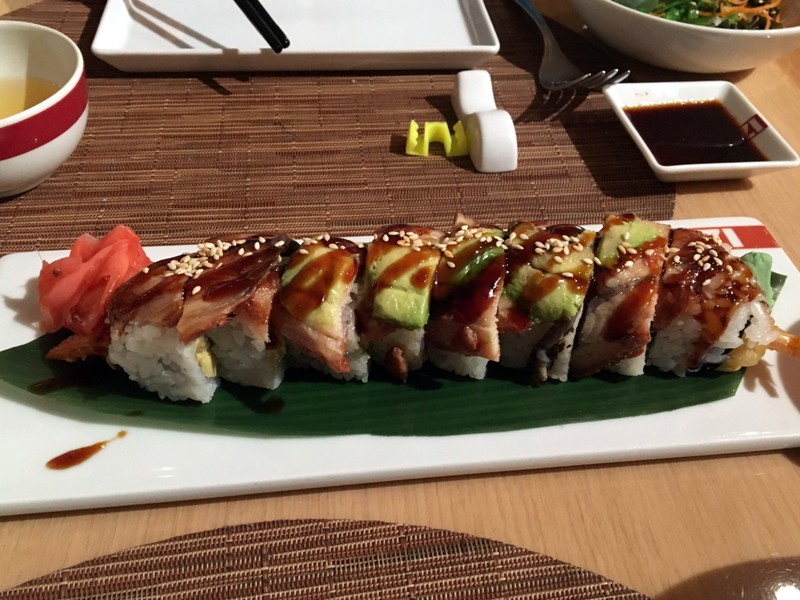 Then we had three little scoops of ice cream for dessert - Green tea, Mango and Chocolate. 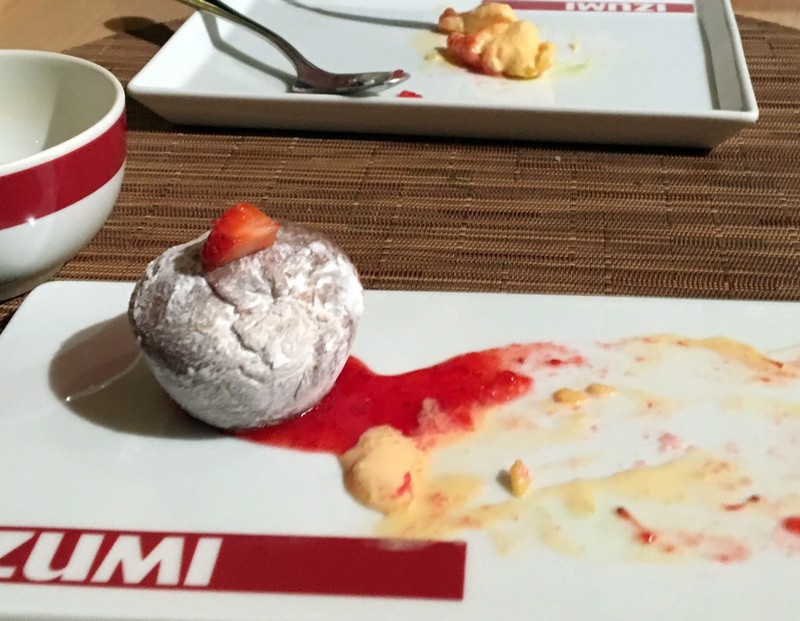 I have concluded that sushi is really not my cup of tea (we drank green tea). I drank the whole pot, plus water which meant I had to get up twice in the night 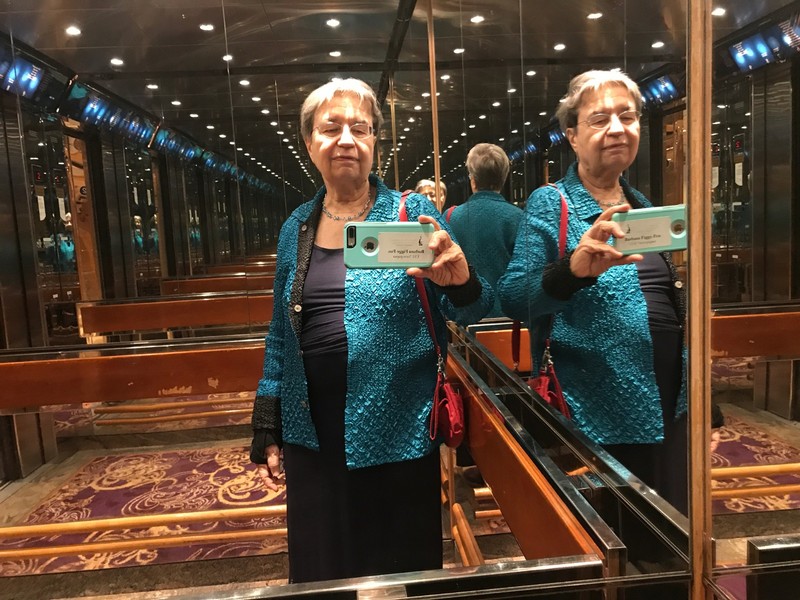 Then we went down to the excursion desk, wending our way through all the photograph set-ups for formal night) to ask about the cruise excursion I had booked which says on the tickets (but not on the information for booking) that the passengers have to be able to walk and climb steps. This excursion was one that I thought I would really be able to do, but apparently not. So the excursion guy said we could switch the tickets for the trolley tour of the dockyard. So Barbara went up and switched the tickets and even though the only tour on the schedule was 2 pm, she got tickets for 9:15. And it is an hour tour so we could still go to church afterward. Barbara emailed the Cobb church to ask about services and they emailed back that they were going to another place to have a joint service but that there is an 11:00 service at Somerset Methodist Church and the pastor would be expecting us!!

The sea is very calm - I don't understand people who are saying that they are seasick. The captain is making all speed toward Bermuda to stay ahead of the nor'easter. The five day trips from Baltimore get to Bermuda at 1 pm on the third day so I think we could actually get there before 4 pm.

[For some reason if you push NEXT, it will take you back to 2007. So the next part of the narrative is Disney Blocks the Dock

Posted by greatgrandmaR 04:10 Archived in USA

Previous Next Table of contents

Comments on this blog entry are now closed to non-Travellerspoint members. You can still leave a comment if you are a member of Travellerspoint.

If you aren't a member of Travellerspoint yet, you can join for free.