Barbara said she would wake up at 6:30 and go to the spa pool and swim. I woke up with the sun shining in the window and I looked at my watch and it said 6:40. We had to move our watches ahead last night and I was suspicious that I had moved the watch the wrong way. And I was right. It was really 8:40. Breakfast in the dining room was only until 9:15. No time for a shower. Get dressed. I was dressed first, and I left and went up to the dining room. They seated me at a large table with a guy with a DUKE lanyard and the couple that was right ahead of me in line. Another couple came and by that time Barbara had arrived. I poured my cranberry juice into the water glass 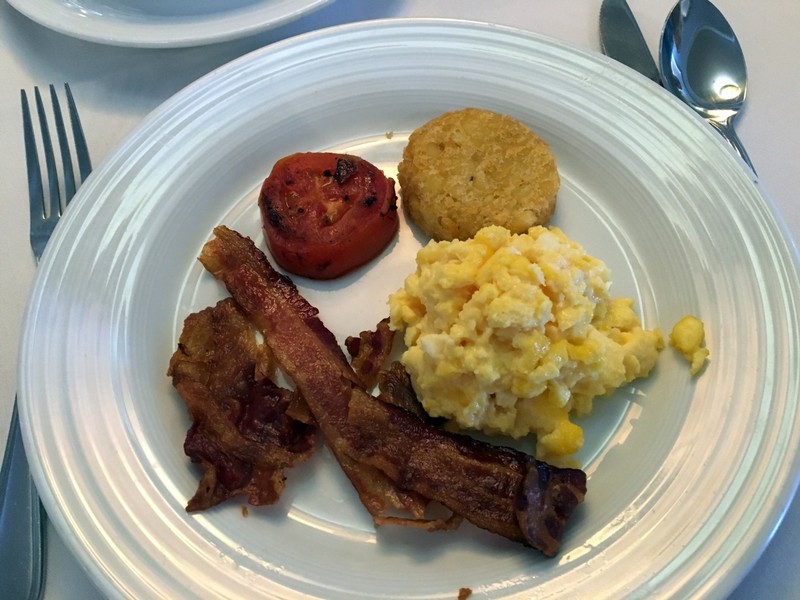 The menus are pretty much the same each day with one special. She went and got herself fruit. I asked for quick breakfast (scrambled eggs and bacon) and grits, thinking they would give me the grits first. But they arrived at the same time. It didn't eat all of the grits as I was full.

Barbara in the meantime had discovered that the last couple to be seated at the table (and were sitting next to her) were a man and his wife and who were event photographers around the NJ/PA area, and they bonded.

It got very late and I realized I was late for the 10:00 special meeting for Platinum and above. So I left breakfast and went to deck 6 (one deck up) to the lounge where the meeting was held. I was 15 or 20 minutes late. I had to show my invitation to someone at the entrance and then there was a line of staff on both sides of the entrance. Since the lounge was pretty full and I was late, I went along the back and across the ramp to the kitchen (servers were circulating with drinks) and sat in an empty chair. The cruise director introduced the captain (who is very difficult to understand) and he had a few things to say and told a joke. Then all the heads of the departments were introduced and each said where they were from and thanked all of us for sailing with Royal.

They had an award for the couple who were Pinnacle Plus (more than 700 days cruising) and also a Crystal award for another couple.

After the meeting I went back to the room and Barbara had left me a note that said she had gone to try the spa pool. When she came back, she said that the pool was warm enough but was 5'4" which was too deep for her to stand in and that made it difficult to keep the splint on her hand out of the water. We decided to skip lunch in the MDR because neither of us was hungry. Barbara did some stretching exercises on the floor. She did a little napping. 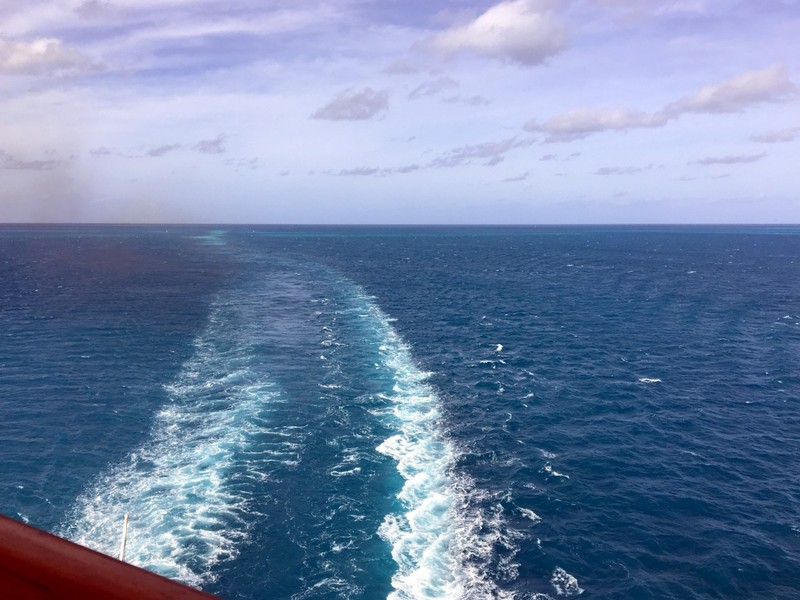 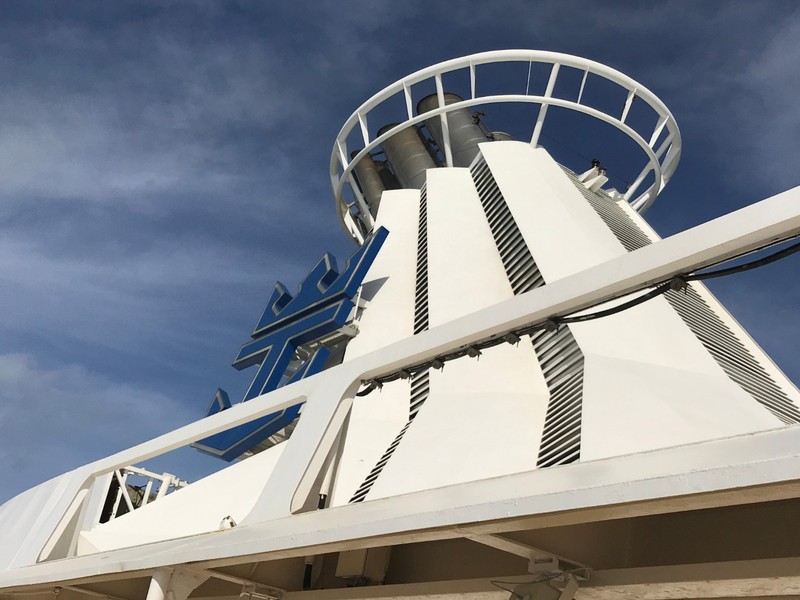 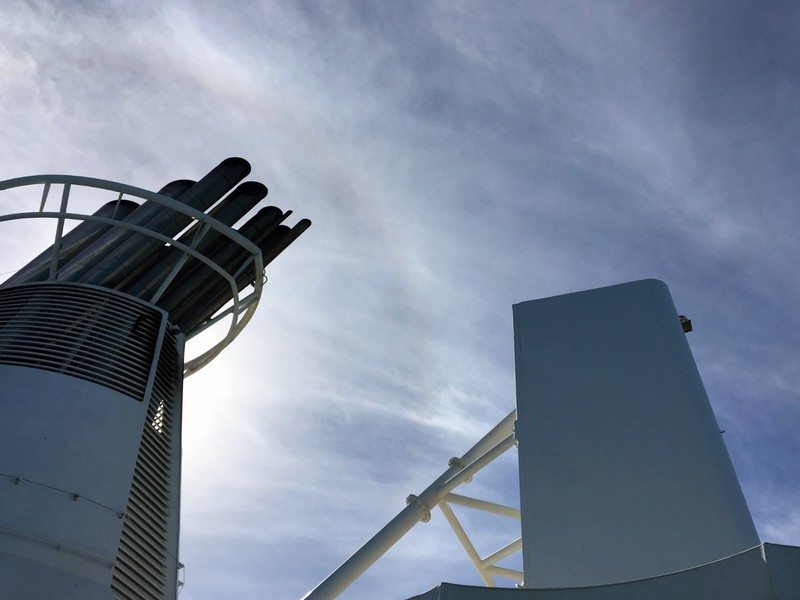 The Lido (Windjammer) closed at three so about 2:30, when we saw Bermuda on the horizon, we went up to the Lido and Barbara got herself something to eat. I didn't need anything. Someone told us that deck 10 was closed because of wind, but that proved to be wrong - it was just the climbing wall that was closed. We went around the running track and it WAS very windy. 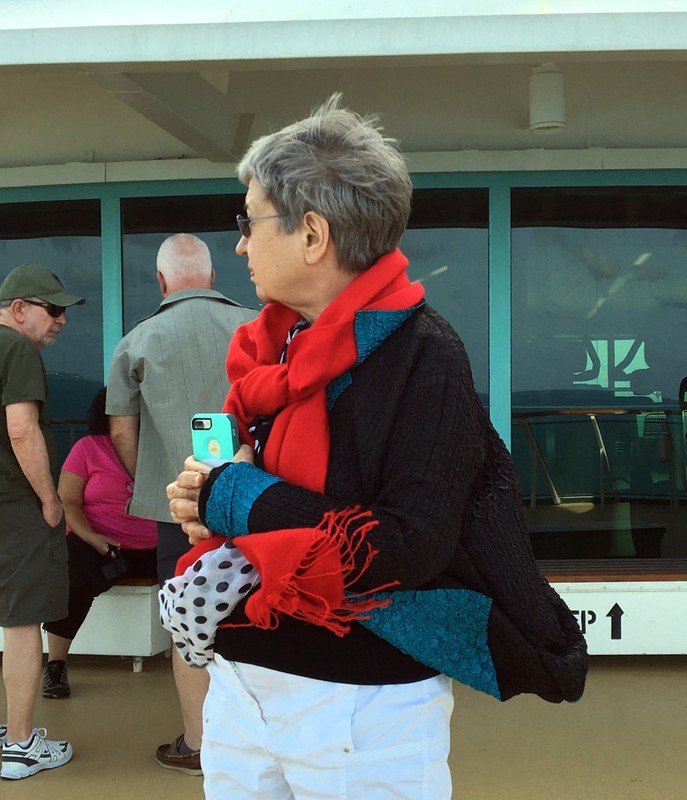 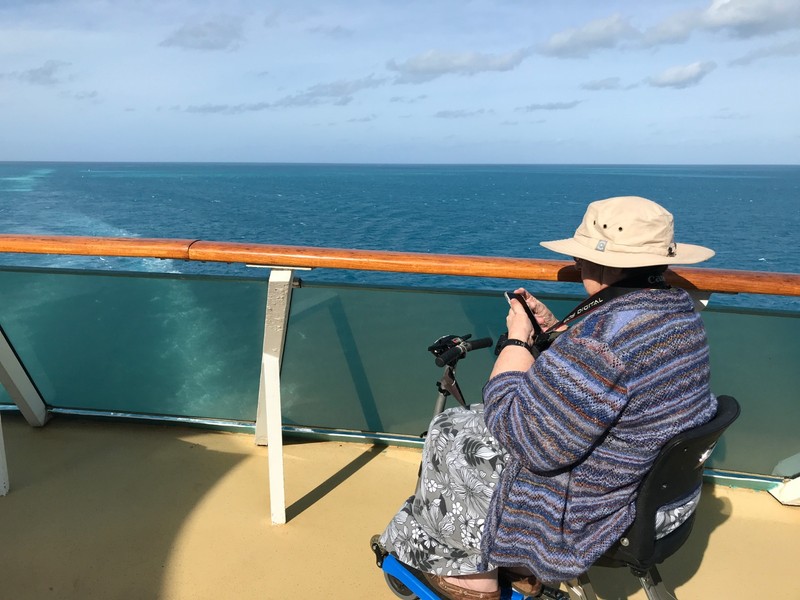 Her photo of me

We approached Bermuda in the usual way - I saw Gibbs Lighthouse and Ft St Catherine. But then we passed the entrance to St. George and went all the way around the back of the islands (the way the St. George ferry goes I think), and came in from behind the Commissioner's house. I think they did it this way to take up the time so we would not arrive too early.

The photographer and his wife came out on deck and he tried to fix the camera and it worked for a little bit. 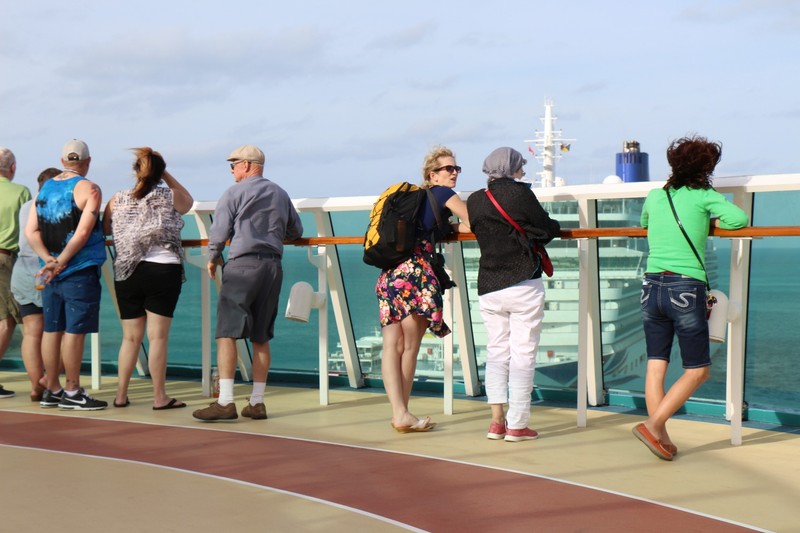 We got to the Dockyard and there were two ships there. One was a P&O ship Arcadia (she was originally a HAL ship and then was Cunard). The other was Disney Magic. Disney Magic was at our spot on the pier. So we had to wait until the tugs pulled her off the pier before we could dock. So we did not get docked until 5. Photos I took while the camera was working 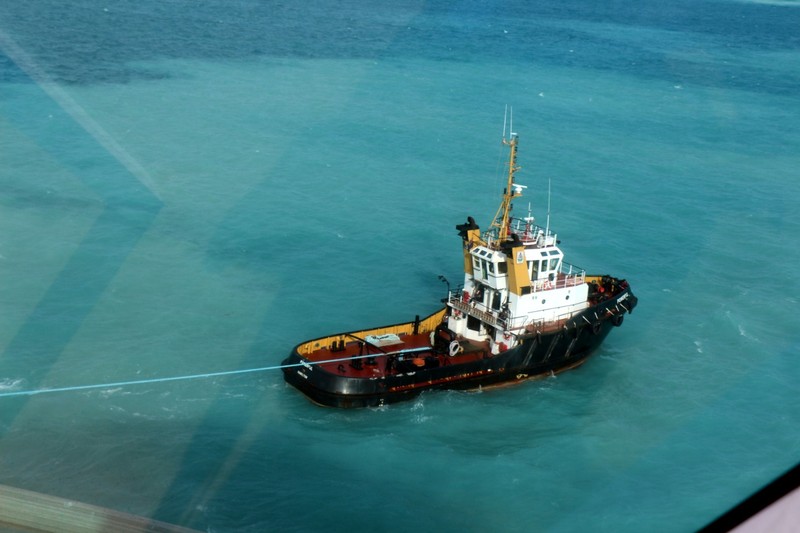 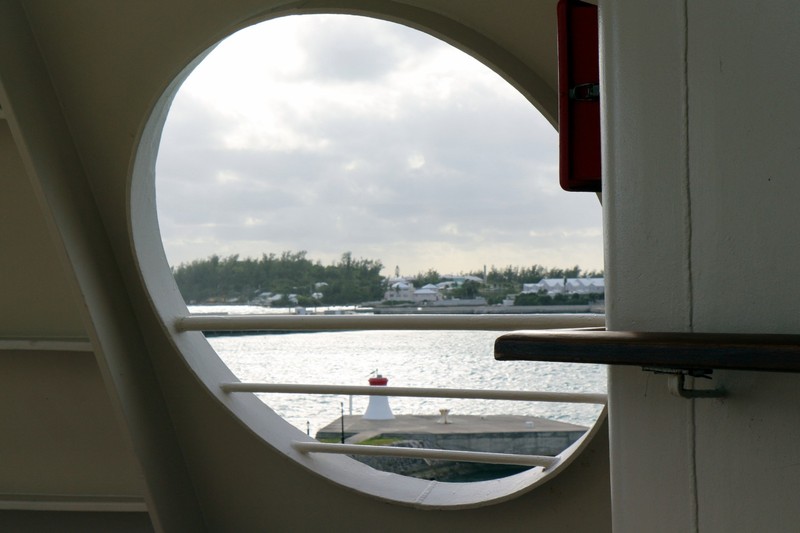 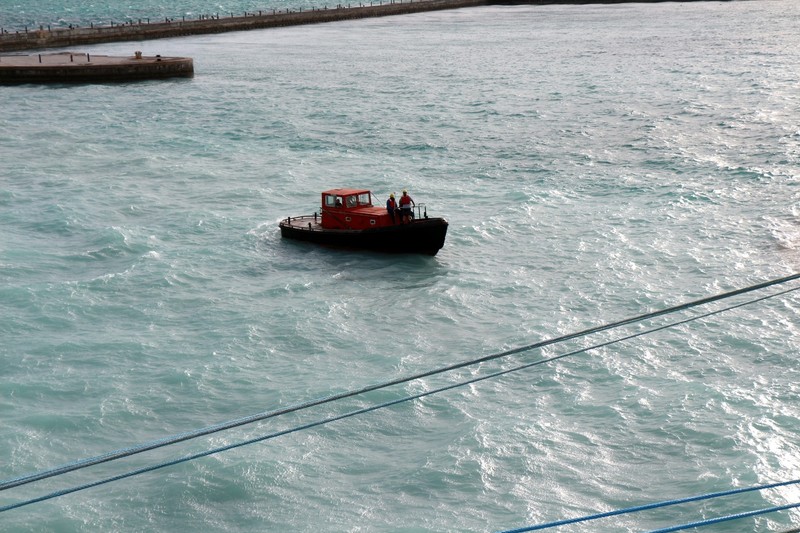 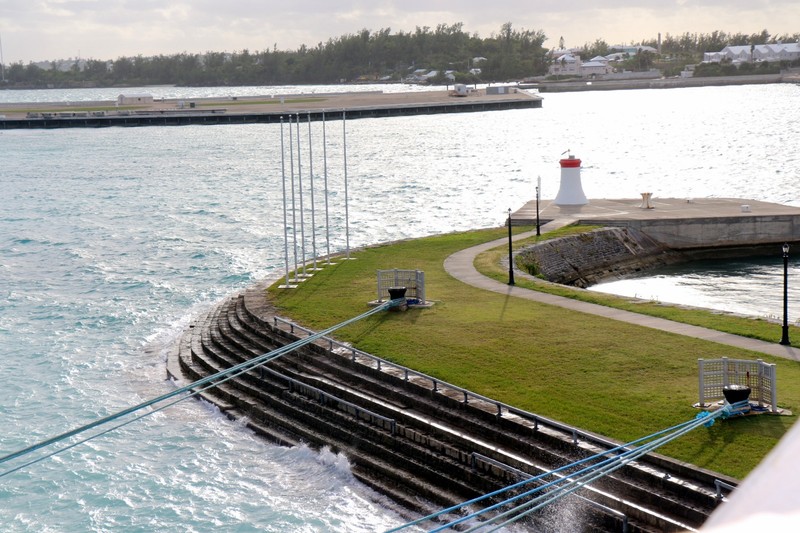 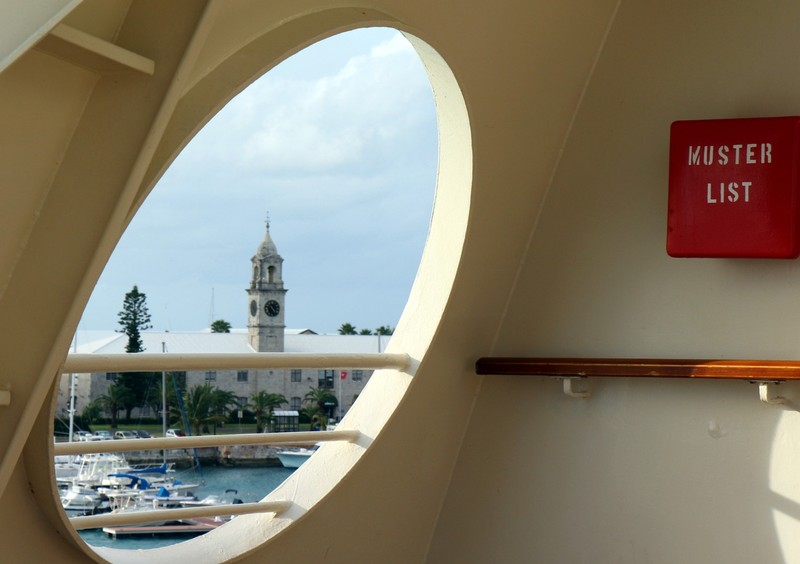 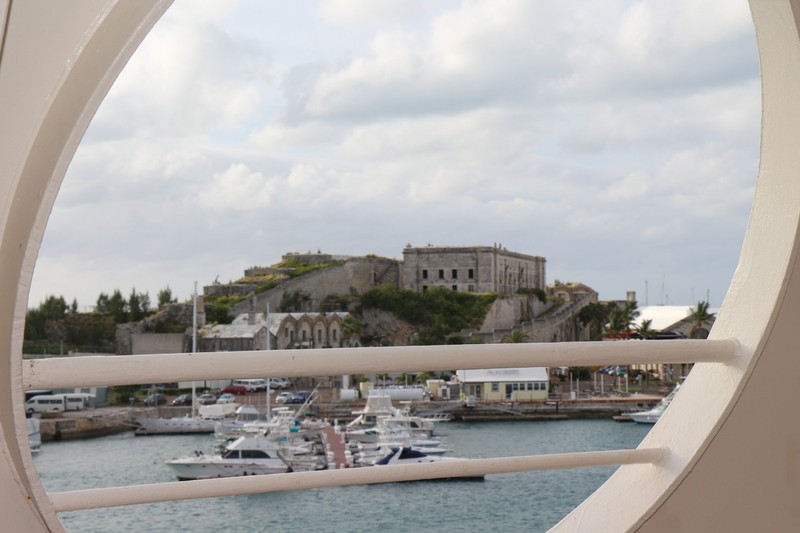 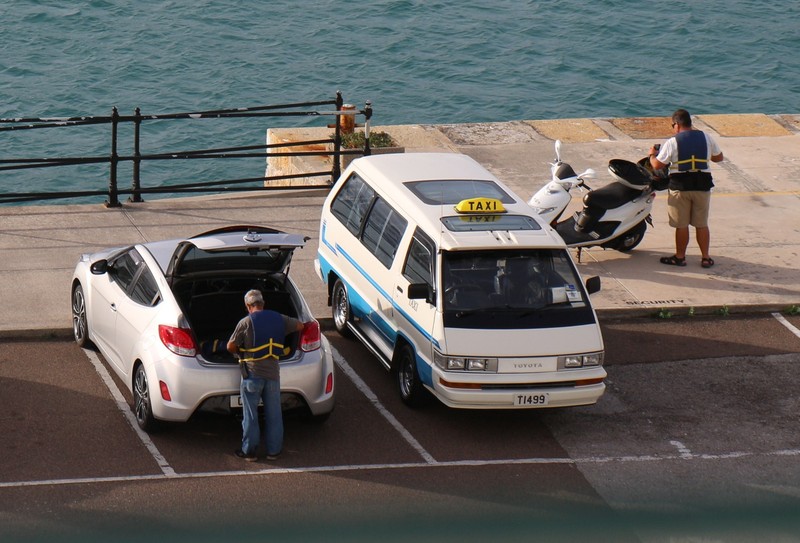 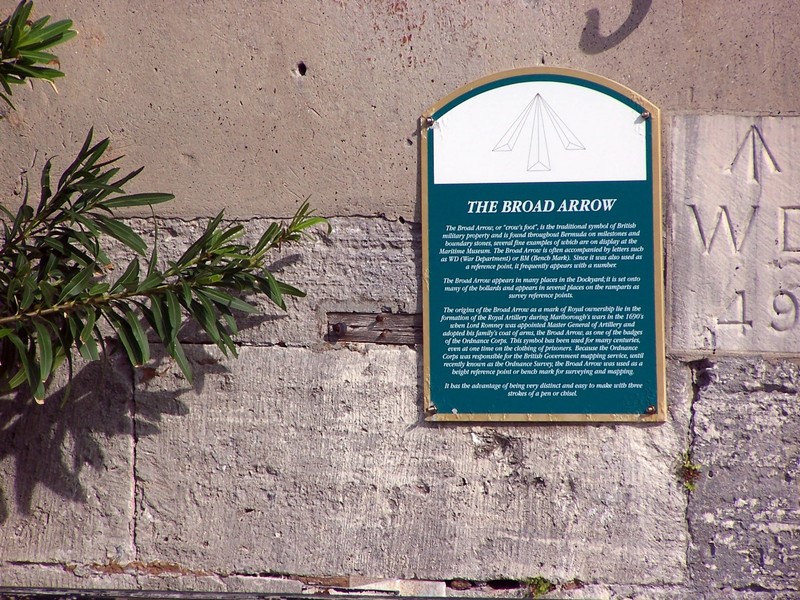 so we came back and went to dinner. 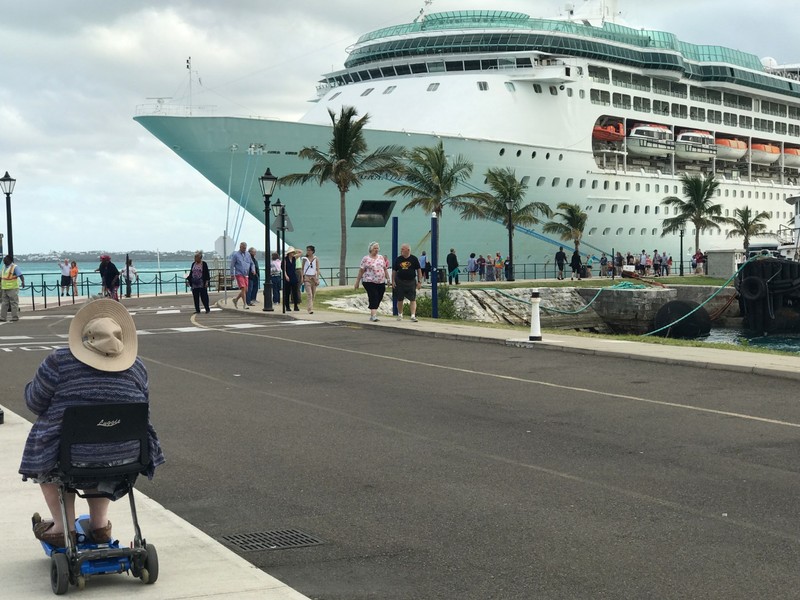 Disappointed going back to the ship.


One couple was already at the table and we could look at what they were eating - Steve had the chicken cordon bleu and his wife had the short ribs. Barbara and I had the fruit plate and then she had the fish of the day 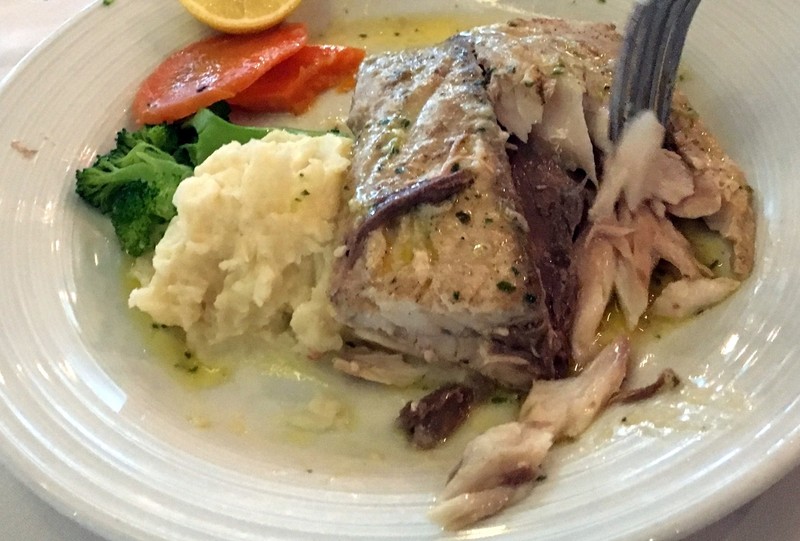 and I had the short ribs which were delicious. 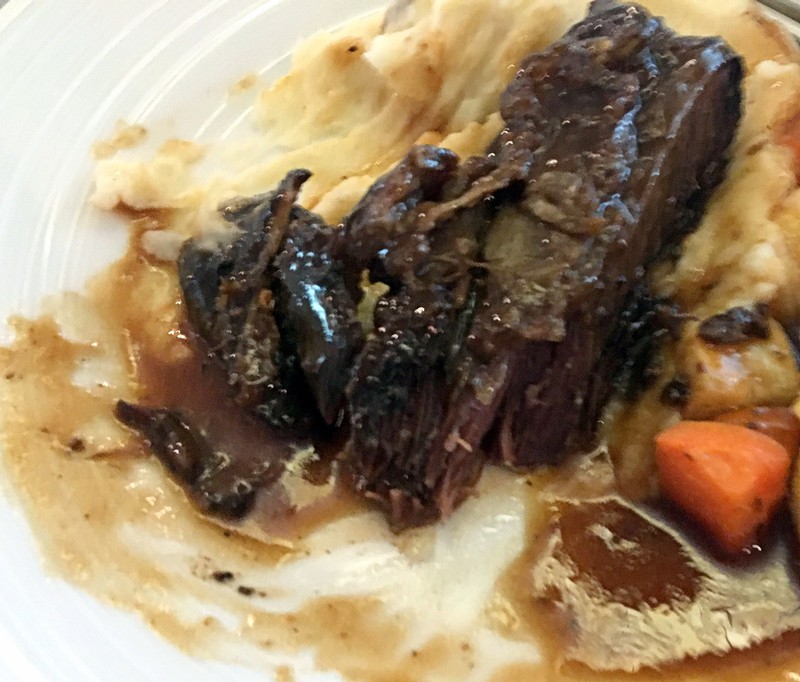 We both had the apple pie ala mode for dessert, and I think I would have preferred the cheese cake. 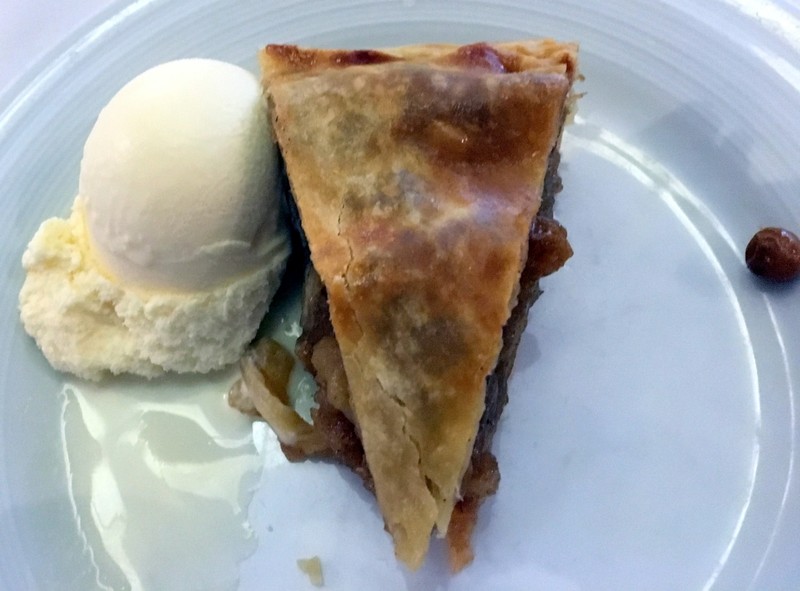 Posted by greatgrandmaR 11:37 Archived in Bermuda

Previous Next Table of contents

Comments on this blog entry are now closed to non-Travellerspoint members. You can still leave a comment if you are a member of Travellerspoint.

If you aren't a member of Travellerspoint yet, you can join for free.